The renewable energy sector has experienced very rapid growth over the first decade of the 21st century. In particular, the solar photovoltaic (PV) and wind power industries have been the most successful ones in terms of global installations over the past 10 years. In 2001 the total world capacity of solar PV and wind amounted to 1,8GW and 24GWrespectively, while their contribution to the world electricity generation was about 0,3%. By 2011, the global installed capacity for both renewables had boomed to 70GW for PV and 238GW for wind power (CAGR 44% and 26% respectively) reaching about 3% of the global electricity production. Newly added capacity for PV in 2012 is expected to be approximately 32GW (102GW cumulative), an almost 50% increase bringing solar to 1% of total electricity generation, whereas wind growth, while diminishing, was still a robust 19%(46GW, 284GW cumulative).

As it happens however, the stellar growth of these two sectors has not been matched by economic success in the global financial markets. On the one hand, the rise in competition, number of participants and capacity installed have significantly driven down production costs and have, consequently, reduced the necessity for subsidizing the industries thereby reducing revenue growth. While independent renewable power producers have done well, fierce competition has created overcapacity and forced solar and wind equipment manufacturers to experience considerable losses and, in some cases, bankruptcy. These companies are faced with an enduring vicious circle whereby the increase in capacity has led to a decline in subsidies, slowed revenue growth, worsened economics and, ultimately, made more difficult accessing bank credit.

Definitely, financial institutions and private individuals who invested in solar and wind production equipment manufacturers have been the biggest losers in the rapid process of development of the PV and wind industries.

Infact, in the 2008-2012 period the share price performance of the 5 major solar and wind listed European equipment producers has experienced a total market capitalization loss of €13B which corresponds to an average return on shares of -85%! (table 1)

The solar PV industry has been facing the fierce competition of Chinese manufactures. In the last 5 years they have substantially boosted manufacturing capacity contributing to massive solar overcapacity and, moreover, they have been able to reduce very substantially the cost per watt of solar panels causing significant margin squeeze of European solar companies.

Whereas in the case of wind power, one of the reasons behind the difficulties of global companies is the slowdown of the two largest world markets. In China, the largest global market since 2010, 2012 annual growth in new installations is expected around +26%, down from +73% in 2010. The US, the second largest wind market after China, expects a sharp downturn in 2013 as the last minute 1 year extension of the production tax credit has only minimally slowed the estimated fall. The reality is now that wind is a victim of the explosion of shale gas fracking, which has made natural gas a very cheap and abundant source.

All over the world, in the last 5 years only a handful of listed firms active in the clean energy sector have experienced a positive trend in market capitalization. Many of them belong to the energy efficiency sector which turns out to be more often than not a winner of the environment- related business. Among renewables in Europe only bioethanol seems to have achieved a rather unexpected success. In Europe in particular, the German bioethanol producer CropEnergies is one of the very few listed renewable energy companies reporting an increase in market capitalization over the 2008-2012 period (+32%). The next sections of this article aim to describe the reasons behind CropEnergies’ positive performance.

Biofuels development in Europe has been supported by legislation since the beginning of the century. The first bill impacting the European biofuels market was the 2003 Biofuels Directive which, for the first time, established non binding targets for renewable fuels in transport (2% by 2005 and 5,75% by 2010). In 2009 the Biofuels Directive was replaced by the Renewable Energies Directive (RED) which extended and increased, and also made mandatory, the proportion of renewable fuels on overall transport fuel to 10% by 2020. The fact that the European legislation does not mandate separate quotas for biodiesel and bioethanol and that the diesel consumption in Europe is almost twice as much as gasoline, seems at odds with bioethanol turning to be actual winner of the European biofuels industry.

In effect, the European biodiesel market is much larger than the bioethanol one: in 2011, the former accounted for about 70% of the biofuels industry while the latter had only a 28% market share. The first reason behind these figures is that the European diesel consumption in the transport sector is considerably higher than gasoline. In 2010, the European proportion of diesel out of transport fuel consumption was 64,3% while gasoline amounted to 30,3%. In the US the picture is reversed: the proportion of gasoline consumption in 2010 was 65,6% and 26,8% for diesel (graph 1 and 2). 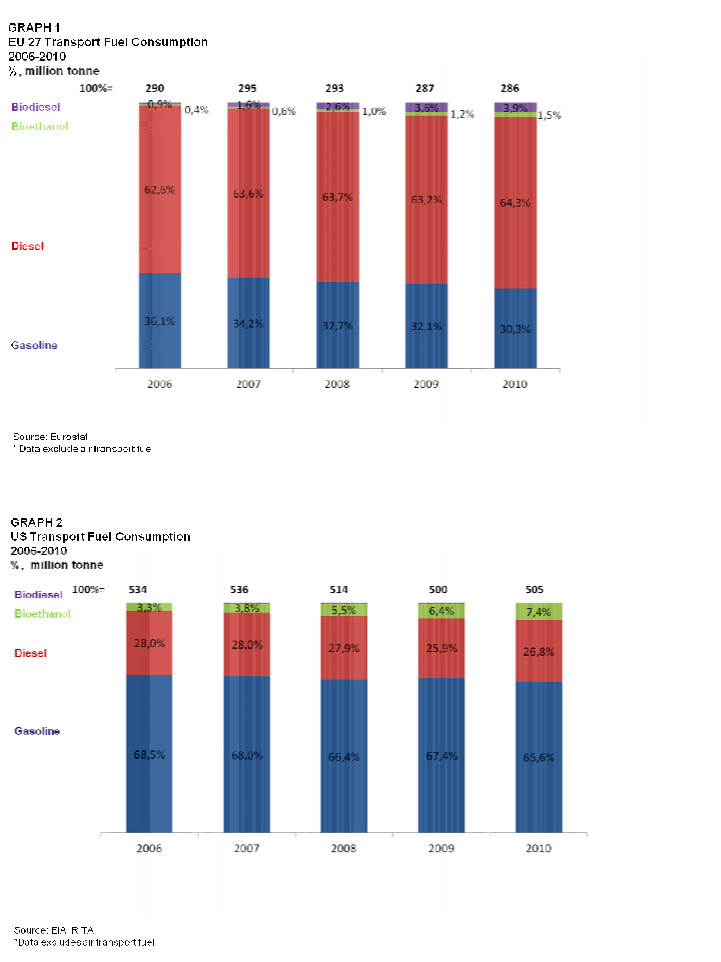 Secondly, the European local supply of feedstock for biodiesel such as rapeseed oil, is far larger than the one for bioethanol (grains and sugar beet). Of course, since corn is known to be America’s number one field crop, the opposite is true for the US.

The 2003 Biofuels Directive established the obligation for member states to develop a biofuels national action plan and to report their annual progress towards reaching the 10%-goal. Most states met this goal by imposing a national blending target that needs to be fulfilled on an annual basis with “sustainable biofuels”. According to the RED, a biofuel is sustainable only if it provides a 35% greenhouse gas (GHG) emissions savings compared to traditional fuels. This percentage is set to increase to 50% in 2017 and 60% in 2018. Another major difference between the US and Europe lies in the motivations for adopting biofuels. Key to the US push for bioethanol from corn was the drive for energy independence, whereas Europe was motivated by reducing GHG emissions.

Table 2 shows the typical bioethanol and biodiesel GHG emissions savings for different types of feedstock and highlights a simple truth: only bioethanol from sugar cane or beets is an efficient and clearly sustainable biofuel which explains in good part the success of bioethanol in Brazil. The percentages reflect first generation production except for jatropha for biodiesel, possibly the most sustainable, but ignored by the Commission. Second generation biofuels, typically from cellulose and enzymes, are not yet fully viable.

Despite a relatively small market share, figures show that the European directives boosted the development of bioethanol more than biodiesel. In fact, this is true both in terms of production and consumption. In 2006 the European production of bioethanol amounted to 1,6B liters and, by 2011, a total of 4,6B liters had been produced (5-year CAGR of 23% vs 15% for biodiesel) of which 21% in France and 16% in Germany. The growth in bioethanol consumption has been even larger: in 2006 it totaled 1,7B liters and reached 5,5B liters in 2011 (5-year CAGR of 26% vs 20% for biodiesel) of which 28% was consumed in Germany and 17% in France.

Can we say that bioethanol is the actual winner of the European biofuels market competition?
In reality it had the good fortune of being largely based in Germany which is the largest European market for bioethanol in terms of consumption. The country consumed 599M liters of bioethanol in 2006 and 1,6B liters in 2011, reporting a 5-year CAGR of 21%. Together with France, the German legislation for biofuels is one of the most elaborate and ambitious in the European region. The 2007 German Biofuel Quota Act mandates for 2010-2014 a yearly biofuel target of 6,25%, the second-highest quota after France (7% from 2010). To enforce biofuels production, in Germany and in some other countries oil refineries have to pay a penalty if at the end of the year they do not reach the required blending quota. However, the effectiveness of such a policy significantly depends on the relative level of crude oil and biofuel prices. In fact, producing bioethanol for instance, is attractive only if the difference between the price of bioethanol and the price of gasoline is lower than the penalty payment.

As mentioned above, the German bioethanol producer CropEnergies is one of the very few success stories among renewable energy listed companies.
In the 2009-2012 period the group performance has evolved very positively in terms of market capitalization, revenues and EBITDA which had grown much faster compared to the biofuel producer Verbio, CropEnergies’ major competitor in Germany, whose EBITDA margin was less than 1/5 of the bioethanol producer at the end of 2011 (table 3).

The group is a spin-off from the German company Südzucker, the largest sugar producer in the European region. Spurred by the EU and German legislation, Südzucker started its first bioethanol operations in May of 2005 and later on decided to create CropEnergies whose IPO took place in September 2006. Currently, the company owns three production sites in Germany (Zeitz 360.000 m3 production capacity), Belgium (Wanze 300.000 m3) and France (Ryssen 100.000 m3) which use both sugar intermediate products and grain as feedstock. Compared to standard gasoline, CropEnergies’ bioethanol cuts GHG emissions by approximately 70%. The high GHG savings do not depend primarily only on the feedstock used but also on the overall production concept. The Wanze plant for instance, produces its own power out of biomass while the Zeitz plant captures the CO2 from the production process, liquefies and sells it to the drinking industry to make sparkling drinks. The annual production of the group is about 700.000 m3 of bioethanol, corresponding to 96% of German bioethanol production and 15% of total European production. The company in short has very concentrated market power.

CropEnergies has considerable advantages from synergies and close connections to the sugar industry. As mentioned above, the group also produces bioethanol from intermediate products of sugar production such as molasses, which are directly provided by the parent company. Making ethanol from these co-products is a simplified process than using grains and less expensive by a factor of 2,5. Furthermore, the company’s factories are close to major agricultural areas providing favorable logistics resulting in lower feedstock transport costs and GHG savings.

Another reason behind CropEnergies’ prosperous path is that the company operates in the two largest European markets for bioethanol by consumption. In 2011 these were Germany with 1.568M liters (28% out of the European total, with 1.709M liters estimated for 2012) and France with 949M liters (17% of total consumption, 949M liters 2012 estimate). Having production plants near the end-markets provides a competitive edge in terms of transport costs since ethanol requires dedicated logistics, thus making CropEnergies a cost leader in its industry.

Last but not least, the bioethanol market is less crowded and characterized by high barriers to entry compared to biodiesel. In fact, the cost of building a bioethanol plant (approximately 800€/ton produced per year) is more than 5 times higher than the one for biodiesel (approximately 150€/ton). The European diesel consumption is also much larger than gasoline thus requiring higher biodiesel production to fulfill the quota.

CropEnergies’ success has therefore been determined by four coexisting factors which gave the company a strong competitive advantage over its competitors. The group has a virtual monopoly in the German bioethanol market and has acquired a dominant position in the European one. It benefits considerably from synergies with Südzucker which provides extensive know-how and connections to the agricultural industry. It operates in the largest European markets for bioethanol and, finally, it faces few peers willing to compete due to the significant obstacles and high costs required for entering the market.

This site uses cookies to provide you with a better experience and service. When navigating or using our services, you agree to our use of them. OkRead more